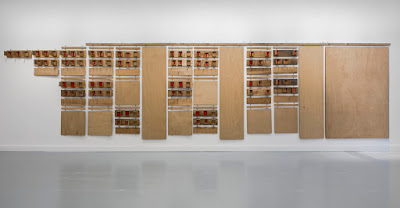 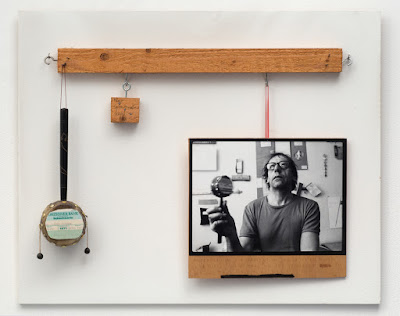 Robert Filliou
1968
Mixed Media, 200 x 1000 cm.
Materials: wood, iron, felted wool
Collection Centre Pompidou, Paris.
The Principle of Equivalence, Filliou’s very own trinity, is a full frontal attack on the fundaments of Western culture: value and judgment. From an artistic and philosophical point of view, ‘well made’ may be seen as the canonical ideal of imitating nature and ‘badly made’ as a space for research and experimentation, while ‘not made’ is concept, axiom or principle.
Excerpt of the conversation between Robert Filliou (RF) and Irmeline Lebeer (IL), Flayosc, France, August 1976.
RF: In December 1968, I started to apply the Principle of Equivalence to an object measuring 10 × 12 cm: a red sock in a yellow box. Already, the Principle of Equivalence was to be illustrated by the stamp. I made a first version that I called ‘well made’, because the dimensions of the red sock matched the dimensions of the box, which was painted yellow with much care. Then there was a version that I called ‘badly made’. I no longer worried if the proportions matched or if the paint was well applied. And a third version, ‘not made’, was simply a written concept: ‘Red Socks in a Yellow Box’.
Later, I took these three elements and stuck them together on a panel: well made, badly made, not made. I repeated these three elements on a panel that became well made. I repeated this once more, badly made. And a third time, not made. The dimensions were tree times larger than the first time. This grouping of three panels I consider well made, for the previous reasons. I repeated it again badly made. The dimensions were again three times larger. This grouping of three panels I considered well made, for the previous reasons. I repeated it again, badly made. I repeated it again, not made. The fifth object I arrived at measured 2 × 6 metres. Because of lack of space I stopped there. But I imagined that if I had produced a series of a hundred objects instead of five, the dimension of the one hundredth object would have been five times longer than the circumference of the earth, or a hundred blablablabla... kilometres high, remembering that the speed of light is 80 kilometres per second...
It means that he final dimensions would have been 1021 light years, I think. Then I said to myself: isn’t it conceivable that the Creator’s initial gesture consisted simply in ‘putting a red sock in a yellow box’? The Principle of Equivalence has, since then, been responsible for creating the permanence of the universe. That’s also why I also titled this exhibition ‘Exhibition for the Third Eye’, because I illustrate my procedure, because of my Principle of Equivalence, because the largest part of the exhibition was not made. Between the dimensions of 2 × 6 m and 1021 light years, there’s a lot of space for the ‘not made’.
So I called this ‘Exhibition for the Third Eye’, and I even suggested back then – I wrote this on the wall of the room they gave me for Documenta in 1972, where the work was shown again – that this work illustrated the Permanent Creation of the Universe. That’s why later, when I was in Berlin in 1974, I applied the Principle of Equivalence to the Permanent Creation of the Universe and titled that work Research on the Origin.
RF: It’s very good. I just want your opinion about this. People don’t understand how I started to apply this thing. What I mean is that I do something once, which is said to be well done, for instance a sock that corresponds well with the box, which itself has been well painted. And then the second one is badly made. I don’t worry about that. The third one is simply the concept. Because I’ve made these three, I now consider them well made and I do them again, badly made, and once again, not made. And so on. Should we add this?